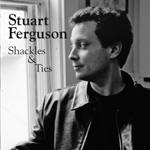 Stuart Ferguson is an exciting voice on Boston's thriving acoustic music scene. Stuart's style incorporates open tunings and energetic strumming patterns. His tenor voice has broad emotion, moving from soothing to biting depending on the call of the lyrics. His songs are stories and poems of personal struggle, both his own and those of people whose experiences have had an effect on him.

Stuart has been featured at a number of New England venues including: Club Passim, The Nameless Coffeehouse, Naked City Coffeehouse, and The Wail Magazine Coffeehouse. He has played around the country from Bellingham, WA to Morgantown, WV and has shared the stage with Ellis Paul, Jim Infantino, Dar Williams, Flynn, Vance Gilbert, Don White, Jon Svetkey, Peter Mulvey and Geoff Bartley.

"Stuart tells stories that have the ring of an unadmitted truth.  His voice is clear and haunting, his delivery is honest and unflinching.  Unlike the all-too-common introverted songwriter Stuart's songs tell the hard stories many of us know, but few give voice to.  A troubadour has a specific job to do -- and Stuart knows how to do that job." -- Jim Infantino