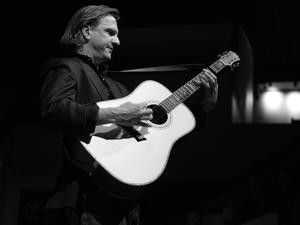 A singer songwriter is only as good as the times he reflects. In times like these, when so many nuts are running the show, it's comforting to know that Ellis Paul is actually holding our sanity on his own stage! Wise, tender, brilliant and biting, Ellis is one of our best human compasses, marking in melodies and poems where we've been and where we might go if we so choose to. Personally Ellis, I'm goin' where you're goin'! --Nora Guthrie (Woody Guthrie's daughter)

Ellis Paul is one of the leading voices in American songwriting. He was a principle leader in the wave of singer/songwriters that emerged from the Boston folk scene, creating a movement that revitalized the national acoustic circuit with an urban, literate, folk pop style that helped renew interest in the genre in the 1990's.

His charismatic, personally authentic performance style has influenced a generation of artists away from the artifice of pop, and closer towards the realness of folk. Though he remains among the most pop-friendly of today's singer-songwriters - his songs regularly appear in hit movie and TV soundtracks - he has bridged the gulf between the modern folk sound and the populist traditions of Woody Guthrie and Pete Seeger more successfully than perhaps any of his songwriting peers.

Yet to hear him at this crossroads moment in his career, you would think he was just getting started. For years, he has been among the folk circuit's most popular and dependable headliners, with a mailing list of over 20,000 fiercely loyal fans. He has released 14 CDs, and recently explored new media avenues with a documentary/concert DVD called "3,000 Miles," and "Notes from the Road," a critically acclaimed book of poems and stories.

The Ellis Paul Archives are maintained by Karen Zundel who also serves as the moderator of the discussion board on the Ellis Paul website.